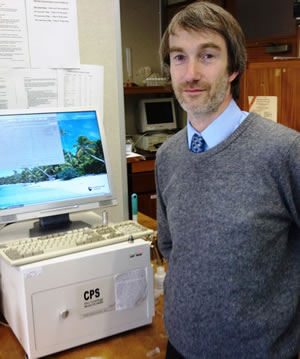 Richard Holdich is a Professor in the Department of Chemical Engineering at Loughborough University. His research interests include a range of particle applications involving various filtration techniques and materials. Applying the CPS disc centrifugation technology, filter efficiency is studied by using particles of less than 2 microns and down to a few 10’s of nanometres. Comparison is made between the filtrate/permeate and the material in the feed. The system will also be used to characterise latex and (separately) titania particles that are used in the group’s ‘cluster size’ research where they will mathematically model the size of clusters formed as aggregates. Given the aggregate size, the model then predicts the performance of the aggregates in processing such as their rheological properties, sedimentation behaviour and cake filtration performance. Another project is looking at the success, or otherwise, of different equipment methods used to disperse nanoparticles. Samples will be assessed using the CPS to generate comparative data understanding that the change of aqueous ionic conditions may influence the results.

Prior to using the CPS DC system, the group used a number of techniques. Now, the CPS is run alongside established methods such as PCS, laser diffraction, SEM, TEM, surface area measurement techniques and an acoustic sizer. It has proved particularly useful in the research program. As Professor Holdich says, “We were looking for a device to provide very high resolution providing the ability to determine individual peaks and one that we could use a self-calibration on: i.e. known mass of material used, known volume of liquid, hence from the size distribution we can work out the original mass used and compare with the known mass. This assumes a volume shape factor and density that is constant across the different size ranges. We use this technique a lot for the Coulter Multisizer and have recoveries of above 90% (i.e. match between the known mass used and the calculated mass from the device). Of course, there is a complication with needing Q(net) so this mass balance can only be performed with materials of a known, and reliable, RI and absorption.”

While primarily being used to generate data to support on-going research projects, it is envisaged to perform a significant role in future work such as Professor Holdich’s mass balance project. This is probably the most academically interesting project. Other projects involving nanoparticles and the methods to make them into engineered systems where they can be readily applied include attachment to surfaces such as polymer membranes (for gas separation), beads (for adsorption and ion exchange) and floating drops (for photocatalytic applications). All these require characterisation of size at high resolution.

The CPS performs nanoparticle size analysis utilising Differential Centrifugal Sedimentation (DCS). This offers the unique ability to resolve very close multimodal particle distributions and to distinguish extremely small shifts in particle size. Rather than using a predictive algorithm, the instrument physically separates the nanoparticles and then measures them as they pass a light source detector and thus provides full characterisation in real time.